The present database contains more than 21,500 entries from the 26 preserved Krems Weighing and Warehouse Books (documenting 28 years). The registers were created between 1621 and 1737 and are housed at the Krems municipal archive (“Stadtarchiv Krems, StA Krems”). Our searchable online database makes accessible thousands of trade contacts and goods movements as well as the names of individuals involved, therewith unlocking important sources on regional and transregional trade in the Austrian Danube area.

The year 1660 is documented twice; the scans from the book featuring the year 1660 were linked to the respective data sets. The years 1661, 1662 and 1663 were taken from the volume documenting the years 1660 to 1663. The images in this volume for 1660 can also be accessed via the scan overview.
Detailed information on the project and the sources can be found in the essay Peter Rauscher–Andrea Serles–Beate Pamperl, Die Kremser Waag- und Niederlagsbücher. Bedeutung und Möglichkeiten der digitalen Erschließung von wirtschaftshistorischen Massenquellen, in: Pro Civitate Austriae N. F. 17 (2012) 57–82. Introductory texts on Krems and on other important trade locations along the Danube in Austria can be found on the project website under “Publications/Press”.

Before beginning your research, we kindly ask you to review the following brief instructions to prevent misinterpretation of the data provided.

The information contained in the Krems Weighing and Warehouse Books was transferred into the database as accurately as possible. Numbering of containers such as “Kistel Nr. 1” (box no. 1) which occasionally occurred has not been included, while the designation of the respective type of container (“Kistel”) was. Merchant signs given beside the entries are noted; these are documented graphically in the scans. 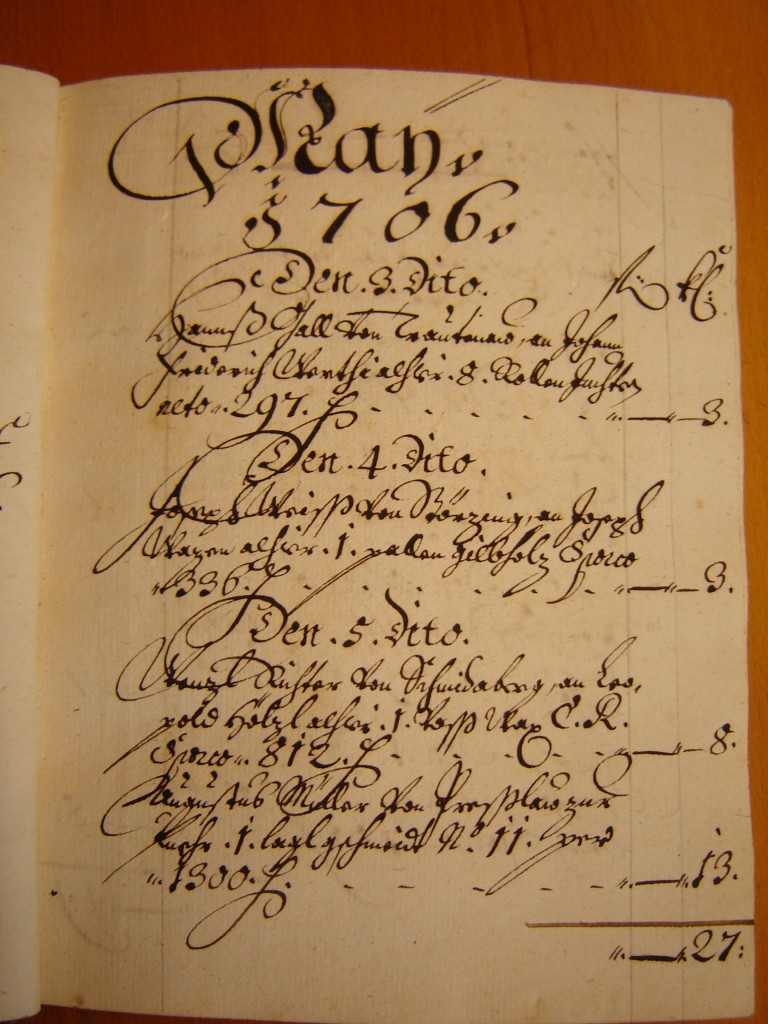 The image shows a typical page from a weighing book (1706, fol. 14r). The first two data sets extracted from it are as follows:

Owing to the great variation in the spelling of names of persons, places and goods, extensive normalization was necessary to simplify querying the database. To improve readability and due to the comparatively few female market participants (less than two percent), the German female forms “Händlerin” (female merchant) and “Käuferin” (female purchaser) were foregone.

The following principles were followed while recording the data:

The spelling of first names was normalized and generally adapted to conform to modern orthography. To simplify identification of specific persons, short forms of names were generally resolved and normalized as well. E.g. “Hanns, Hans” → “Johann”; “Jacob” → “Jakob”.

Surnames and names of places, as far as they were known to the editors, were adapted to their current spelling respectively the spelling most common in literature. E.g. “Zolickhoffer, Zollickhoffer, Zollickhofer, Zollickhover” → “Zollikofer” or “Syringshoffen, Sieringhofen, Sirlinghofen” → “Sierninghofen”. If no established spelling could be determined, some of the surnames were circumspectly modernized. For example,

The designations “Händler/Person 1” (Merchant/person 1) and “Händler/Person 2 (Käufer)” (Merchant/person 2 [buyer]) in the entries should not be understood to mean that all involved persons were merchants. In fact, a significant percentage of participants in these trade events were producers, craftsmen, manors, ecclesiastical institutions and end consumers. One may assume that agents of overseas trading establishments and freight forwarders likewise appeared regularly.

Furthermore, the reference to a “Käufer” (buyer) is permissible only where two parties were involved in a trade. In these cases, “Händler/Person 1” (Merchant/person 1) should automatically be viewed as the seller. If only one person is mentioned, then that person is likewise assigned to this category; this does not necessarily mean that the person is a seller, however. The entries in the warehouse books frequently include the additional information “hinein” (in) or “hinaus” (out) allowing the direction of a trade to be inferred.

A separate Index of persons provides information on all persons mentioned in the Krems Weighing and Warehouse Books.

Place names are generally normalized and included in their German form as in the sources (e.g. Zlabings instead of Slavonice). Names of places that could not be localized with certainty were entered in one of the variants used in the sources. The names of all places appearing in the books have also been searchable via a separate database (Index of places) containing useful additional information since 2018.

The regional assignments were performed by the editors largely according to the historical circumstances of the 17th and early 18th centuries. Hence the towns in what is now known as the Innviertel in Upper Austria were assigned to Bavaria, places in the modern Austrian province of Burgenland to Hungary. For the Holy Roman Empire (without the Habsburg territories and Salzburg), the Imperial circles served for orientation. Current designations were used for the Austrian lands and provinces—e.g. Lower Austria, not Austria below the Enns.

It should be noted that due to the varying orthography in the sources, it cannot be guaranteed that every person and place appears in the database in a single spelling only. Therefore, please take other possible spellings of your search words into consideration when querying the database. Use the drop-down lists of persons, places, regions and trade goods to simplify your search.

We have also provided a glossary of all traded goods and another of the dimensions and packaging units used.

This project was funded by the Fonds zur Förderung der wissenschaftlichen Forschung – FWF. In keeping with the open access policy of the FWF, all data are available free of charge for scientific and private use. Any form of commercial use of the image files is prohibited. Please refer to the Creative Commons licenses linked at the bottom of the respective pages.

We kindly ask all users to share leads concerning potential identification of hitherto unknown merchants or places with us (contact). Information from archive holdings of various city and manor archives, not all of which the project editors can visit in person, and from local history publications is highly valuable to the project team. Those who provide useable information will naturally be acknowledged.